The empty property in the Avenues was dripping with potential and history.

Adam Collings and his wife first saw the distressed 1880s home in 2011. 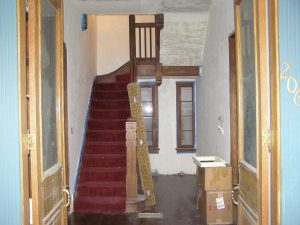 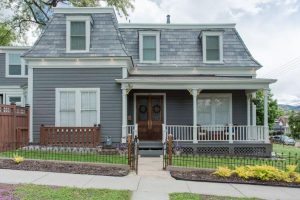 The outside of the house resembled the Addam’s Family house before it was remodeled. Trina Knudsen, Renovation Design Group


“We were actually at a friend’s barbecue when he pointed it out to us,” he said. “He said it was abandoned. We went right over there to check it out. We were not the only ones interested. The mailbox was stuffed with notes and letters trying to get hold of the owners.”

The young, optimistic couple was intrigued by the house and its potential. They were determined to find the owners and, at least, take a chance that they could purchase it. They made a YouTube video introducing themselves and explaining why they wanted to buy the house. They lived in an apartment in the Avenues and loved the area. They didn’t have children yet, so they could put all of their love, care and money into this old house.

To their amazement and excitement, the owner agreed to sell the house to them. She had originally bought the house with cash in 2004, but as a corporate banker she had taken a promotion and moved to New York four months later. She left the home with hopes of coming back, but five years went by while the house sat empty.

Historic homes take a lot of work to care for, even when the owners are living there. Without anyone living in it, this home quickly became run down: “It looked like ‘The Addam’s Family’ house,” Collings said. 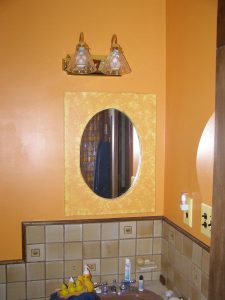 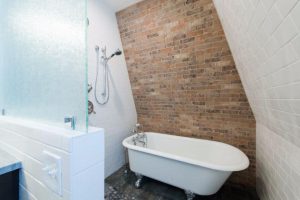 The Collings used creative design to remodel the master bathroom to include the crawl foot tub.

One of the big problems was the basement. During the time the home was empty, the irrigation lines had been turned off, but the main supply water line was left on. Plagued with a slow leak, the basement was gradually destroyed. The owner called a cleanup company to gut it. The bones of the house were actually in good condition when the Collingses bought it.

“It was in good shape, structurally,” he explained.

The walls, copper plumbing pipes and the somewhat more modern electrical wiring from a previous remodel were exposed. And, due to the flooding, it was partially demolished. From a construction standpoint, those were all positives.

The property was too damaged for a regular loan, but it wasn’t damaged enough for a construction loan. The Collingses were able to get an FHA 203 streamline loan that gave them $30,000 over the selling price for immediate repairs to make the house livable.

“Basically, we had to make it legal to live in by government standards,” he said. “It wasn’t pretty. We had to do flooring and paint to the point where no raw wood was exposed.”

At this point, the Collingses came to Renovation Design Group to get a plan for their new, old house.

“We got a whole house design for the entire house,” he said. “We knew we were going to live through the remodel and divide into phases, but in order to do that we needed a master plan.” 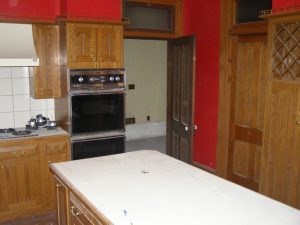 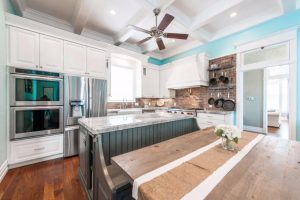 The kitchen remodel was part of the master plan for this home remodel and updated in Phase 3.

“Plus, as a family, we could only handle so much stress at one time,” he said.

Renovation Design Group designed a master plan for the whole house remodel. The Collingses did the remodel is three phases. 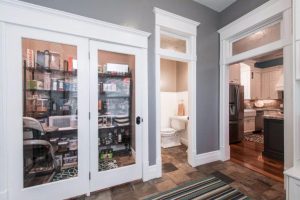 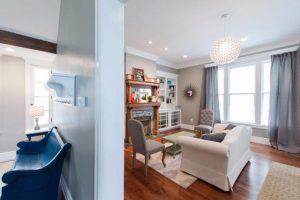 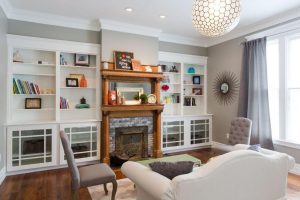 Renovation Design Group designed a master plan for the whole house remodel. The Collingses did the remodel is three phases.

They rented the apartment and moved upstairs and started Phase 2 — reconfiguring the main level. The main level of the three-story home had a formal living room and dining room, along with the kitchen, a large laundry room and a powder room. They took out the walls between the kitchen and the dining room to create a great room which accommodates cooking, dining and gathering space.

At this point the Collingses were migrating around the house as a family now. They had a baby girl in 2012, so that changed the dynamic a bit. They took a brief remodeling break and geared up for Phase 3. 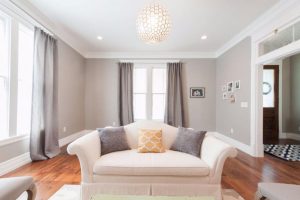 involved reconfiguring the master bathroom and building an addition on the upper level. Typically additions are hard to come by in the Avenues, but this was technically adding an addition above an existing addition so the Historic Landmark Commission approved it.

The open air deck above the mudroom was enclosed to create a craft room and laundry area. This space is a big, open room with four large windows, letting in lots of natural light.

In addition, Phase 3 finished off the main level: The mudroom received built-in lockers and a pantry. In addition, they updated the kitchen/great room with gorgeous custom cabinets; coffered ceilings; a custom island; granite countertops; and new, high-end appliances.

“The kitchen was designed with cooking in mind,” Collings said. “Both my wife and I love to cook, so we wanted a kitchen designed for cooking.”

Collings said each phase took about six months to complete. 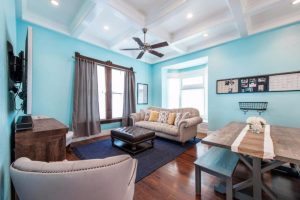 Overall, they said the project has been a wild ride but worth it. However, their time in the Avenues is coming to a close. They are starting their next chapter in the south end of Salt Lake County, this time building a new, custom home.

Make no mistake, however, the historic, once-abandoned house will always have a piece of their hearts.