I have lived in Salt Lake City over 20 years, some in Sandy, some in Holladay and the remainder in Harvard/Yale district.  My love for Sugar House, 15th South and 15th East, and Harvard/Yale is nothing new.  From the early 90’s, I drove these streets and became captivated with the uniqueness of homes, the tidiness of yards and the huge trees in which high branches often met one another in the middle of many streets.  Driving up and down these streets in summer was like entering a corridor of comforting, shady green.

Presently, I am a retired teacher.  However, while living in Holladay, I taught school in downtown Salt Lake City.  My favorite part of the drive was, not surprisingly, Sugar House, 15th & 15th, and Harvard/Yale district.  By far, my very favorite was Harvard/Yale, specifically Normandie Heights.  Homes in this quadrant are regal, impeccably maintained, and have trees of many varieties, colors, and sizes.  After a fresh snow, this area is truly a winter wonderland.

I wanted to make a housing change but could not imagine a move to Normandie Heights ever happening.  As it turned out, selling my home in Holladay, along with surprisingly low interest rates, allowed me to purchase an English Tudor on Princeton Ave.  I had driven by this home many, many times but had no idea I would live in this quaint and welcoming Tudor.  My younger daughter named my new to me home “The Princeton Pearl,” a perfect name for a polished and inviting English Tudor.  In April 2013, this remarkable  “pearl” became my home!

Fast forward another three years.  Joe and I knew we clicked and wanted to see how life could be with one another.  For many years, Joe worked out of country.  For visits, he traveled to Salt Lake City every few weeks and usually stayed for a week to ten days.  It soon became apparent “The Princeton Pearl” was too small for us.  We briefly considered building an addition and called in Annie, the architect, for ideas.  It became clear I had little patience for this process while living in the home.  I also knew I did not want to leave Normandie Heights.  This little neighborhood had become my querencia (cur-en-cia, a Spanish world meaning a love for one’s homeland).  It also means one’s safe space.  This area had become my true home where I belonged and felt safe within it.  Jokingly, Joe says I get ill when I am out of my locale.  I cannot argue with this! 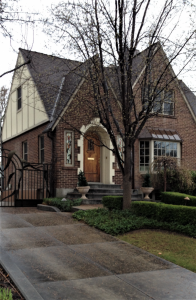 We were in agreement we would try to stay within Normandie Heights (either that or “I” decided this, a more likely conclusion!).  In the Spring of 2018, a few houses came on the market and  sold within hours of listing.  We continued looking.  In my next blog, I will explain how another Tudor on Harvard Ave. became the very home we are currently renovating.

This entry was written by the home owner Joan Hammond