For context it is important to understand the creation of the Tudor house. The name “Tudor” originated when British monarchs came from the country of Wales and the royal “House of Tudor”. The style originated in England, dating back to the late 1400s and early 1500s. With a blend of decorative Renaissance components and Gothic architecture, Britain’s Tudor style is mostly homegrown and typifies many dwellings in England. Its appeal then migrated throughout the United Kingdom and Ireland, with many changes along the way.

As mentioned in an earlier entry, the Tudor Revival style became popular in the United States up to the 1940s. Normandie Heights, where our Tudor is located, is a mixture of English Tudor, French Norman, and Period Revival cottages. Construction of these homes dates from 1925-1935. We believe ours was built in 1926.

Characteristics of a true English Tudor house, both exterior and interior, are generally agreed upon. Exteriors were eclectic with asymmetrical design. Stones, as well as bricks, were often used for exterior decoration with many patterns, some quite complicated. Intricate chimneys were not only decorative, but functional, utilizing materials such as copper and unique masonry work. It was common to see Tudors in which the lower exteriors were made of brick or rock while the upper parts were stucco of various colors. Half timbering, the wide strips of painted wood, duplicated the look of a structural timber frame that was left exposed and infilled with wattle and dab (a traditional method of weaving wooden strips together in a lattice and infilled with some combination of wet soil, clay, sand, and straw.)

Windows were generally groupings of three, four, or even more and were framed with either wood or metal. Some were tall and narrow, others were small with diamond patterns made of lead. Stained glass windows were common with intricate patterns. Entrances into Tudors may have been complemented with such windows and, perhaps, coupled with half-timbering. Steep roofs were designed to allow drainage for large amounts of rain (think London!) and; in some locations, deep snow that could melt and run off quickly.

Gardens of English Tudor houses varied from very formal design to a more haphazard approach. The formal approach to gardens was typically a symmetrical design with pools, water features, and statues. Hedges were perfectly trimmed rectangles with large spaces of grass and possibly brick walls from feature to feature. More often than not, any fencing was of ornate shapes made of wrought iron with brick columns.

The haphazard approach to English Tudor gardens, resulted in an eclectic, functional design where fruits and vegetables were surrounded by both perennial and annual flowers, shrubs, trees, and weathered wood furniture. Walking paths were most likely made of gravel and fences of wood. This design provided a very weathered, yet charming – cozy garden. Both designs were very appealing and, possibly, dictated by economic situations of owners as well as the size of the home and surrounding land.

With such visions of the exteriors of the English Tudor house, let’s now focus on the interiors. A true Tudor was one of warmth with colors of crimson, yellow, gold, and orange. Such colors were coupled with darkly stained wood or wood painted white, depending on the levels of desired light. Floors in the living, dining, staircases, and bedrooms were typically hardwood. Bathrooms and kitchens were tiled in various patterns and custom designs, often accented with wrought iron, copper, or wood hardware. Archways were typically rounded, while interior doors and windows had ornate framing. Doorknobs were crystal-like glass with door plates made of bronze or brass. Decorative moldings and metalwork, perhaps on staircases, were pieces of beauty with intricate details rarely seen in today’s construction.

Within Normandie Heights, many great exteriors of English Tudors illustrate the features mentioned above. Some may look very similar; but, upon looking closer, no two houses are alike. Rather; each is one of a kind.

One of my very favorites, the home displayed above was built in 1927. It displays many characteristics of typical English Tudor design such as the steep pitch of the roof lines and the uniqueness of leaded windowed doors. On the upper level, a windowed door leads out to a Romeo and Juliet balcony. This door, made of old oak and leaded glass, is named the Angel Door by the owners. A storm door was made to protect the integrity of the precious oak. Three windowed doors snuggled together on the lower level are also leaded and covered by traditional lace draperies. They lead out to a small patio with a wrought iron fence, brick pillars, and Gothic light fixtures. I like the way the stonework in front leads the eye to a very welcoming front door. The door, intricate and very beautiful, is made of stained and leaded glass. I imagine myself as a child running up to the doorway and entering a warm, cozy living room where a fire is burning, and a white cat is curled up on the hearth. 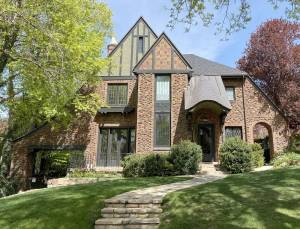 This well-appointed home, while much larger than a typical English Tudor, nestles in well with its neighbors. The asymmetrical design of this home busies the eye. Notice the large, intricately carved half timbered gable on the left side of the home offering a little color to the home’s front exterior. That roofline extends down in a sweeping curve to cover an entryway to the long driveway housing an equally large wrought iron gate. The bricks are of a different design; some protrude from the house, thus giving the exterior interesting depth. This home has a small patio off the living room that is fenced in wrought iron a common design feature of that time. Below the smaller half timbered gable with a brick infill is a very tall leaded glass window of different design, which leads the eye downward to the front entry. Designed by the original owner, a large domed awning, once shiny copper, is now oxidized to an antique state and ready to protect visitors from weather. To the right of the home is another brick arch. What the eye cannot see are large colored black, white, and blue stones mortared into the front walkway. Warming the heart in winter are handmade snowmen and tiny snow sleds in the yard; and, in summer, basketballs, tricycles, and scooters are scattered about. Relatively new to the neighborhood, a young family with small children gives fresh energy to this historical neighborhood.

When considering characteristics of a Tudor, this home is a crown jewel. As a whole, the eye darts left to right, right to left, up to down and down to up, quickly catching the regal beauty of this home. My eye notices four portions, each one of a kind yet with typical Tudor materials. From the left of this home, the first gable has half timbering with gridded windows seen in many homes. What makes this portion so unique is the stonework wall which houses a small patio. Through a full set of windowed doors, one is led out to a cozy, private nook perfect for coffee on a warm summer morning. Notice the Gothic light fixtures in this portion and the next. With a heavy look, these lights give the home strength and hardiness.

As the eye moves to the right, it is led upward to a turret with a Cathedral style roof and three stately stained glass windows just above the front entrance. Set back a few feet or so, the receding front door is surrounded by stone. This feature provides the home a grand yet human scale entrance. An alcove of sorts, it houses a heavy wooden door with a bishop’s crown top. Set in the middle of the door is a gorgeous stained glass window, ornate in shape, welcoming visitors to this exquisite home.

The third portion, smaller than the others, houses more half timbering and an inlaid narrow feature of brick. This tall alcove seems a perfect place where a statue of St. Francis of Assisi might be protecting birds and squirrels while they hide in boulevard trees gracing this home.

Lastly, when the eye follows the base of stonework to the right, the final portion is regal. The eye is drawn up to a bishop’s crowned glass door leading out to a Romeo and Juliet balcony of wrought iron design. Windows below are flanked by small arches of brickwork protruding out and creating interesting depth. Very similar to the last home featured, the eye then sees a sloped gated brick arched entrance leading to the backyard.

The current owners of this home view themselves as simply caretakers for this grand, impeccably kept Tudor. While someday the home will have different caretakers, for now they maintain its structure and style with respect and tender loving care.

With a better knowledge of the characteristics of a Tudor house and a tiny tour of three examples, it’s important to note these three homes grace the neighborhood of Normandie Heights. The owners were kind enough to permit me to feature their homes and for this I am very grateful!

And, so, we circle back to our Tudor with its own set of characteristics. With research and thought, we brought in Annie, our architect, and Emily, our interior designer. While Emily and I began meeting on design and style, Annie began work on the structural integrity of our home as well as the planning of an addition. Because of their expertise and involvement with numerous projects, both young ladies are well known within Normandie Heights. In good hands, we are ready to get to work.

This entry was written by the home owner Joan Hammond in collaboration with the architect, Annie V. Schwemmer