Jill and Bob moved to Salt Lake City from Connecticut to reconnect with family and to find a house suitable for their impending retirement.

They wanted a house with a comfortable gathering space where they could age in place. Stylistically, they wanted a home that had the New Englander flare they were used to. Annie went with them on their house-hunting trips. 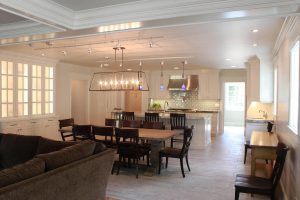 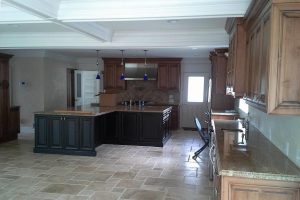 Making the kitchen island smaller and removing the beam in the ceiling allowed space to create a dining space in the great room.

“We knew we probably would need to renovate a bit, but we wanted a house we could turn into what we wanted,” Jill said. “Because we were looking for a retirement house, she suggested we consider buying a California Ranch-style (house), but we love Colonial-style houses and Colonials and Capes always have stairs.”

They found a beautiful Colonial-style house with three stories in the upper Avenues. They were thrilled with the find. However, a three-story Colonial is not exactly conducive to retirement living. “The curved staircase wouldn’t really allow for us to put in a chair escalator, and the back set of stairs is steep and awkward. Even the dog trips on those stairs.”

To solve the accessibility issue, Annie suggested they put in an elevator. “We had the space for an elevator on all three floors,” Jill said. “That solved that issue, so we went for it.”

The original house was built in 1940 and has had only two owners who lived and reared their families there. The third owner bought the house to renovate and flip it.

“When we had Annie come evaluate the house, she verbalized a bunch of ideas to brainstorm with us,” Jill said. “She suggested we make the island smaller and move it away from the stove wall.”

The stove, dishwasher and sink were on the same wall, so we needed to provide sufficient space so more than one person could work in the kitchen.

There were also coffers, or recessed panels, on the ceiling in one part of the kitchen. If the island were resized, the coffers would be awkwardly placed.

“Annie explained that we either needed to add more coffers or remove them to make the space look seamless,” Jill said. “Just looking at the space, Annie rattled off 10 ideas. … She basically drew up three concepts: the bare bones version; a plan that turned the island and reconfigured the kitchen; and a third plan that took the porch off the kitchen and turned it into a mudroom and powder room and turned the original powder room into a pantry for the kitchen. When we saw the three concepts we knew right away: No. 3 was it.”

Of course, like so many clients Jill and Bob didn’t get started on the remodel right away. Not long after they moved in, Jill filled an upper kitchen cabinet with glass vases and serving dishes. She put a tall vase on the counter below the upper cabinet. One night they were in another room when they heard a strange sound coming from the kitchen like something was ripping.

“The cabinet of glass items was nearly falling off the wall, and the one tall vase was holding the whole thing up,” Jill said. “My husband said, ‘It looks like they put a screw in the sheetrock and didn’t properly anchor it.’ We hurried and emptied all the glass and propped a step stool underneath it. It wasn’t worth bringing in a contractor to fix it when we knew we had a remodel in the future, but I just wondered, what else was going to fall off the wall?”

That sparked the remodel into action. They started the design process while the stool propped up the cabinet for five months until the actual construction began.

Jill and Bob lived in the house through the remodel. They moved between the floors of the house while contractors worked.

“(We) just tried to stay out of their way,” she said. “Even though we were living here during construction and ran into a few issues along the way, this remodel was the least stressful for me. On the other two remodels in Connecticut, I acted as the general contractor. This time, I hired a general contractor. We had weekly meetings with him, some of the subcontractors, the architects and both of us. It was an amazing team, and we all worked together to make it happen.”

Now Jill and Bob’s project is nearly finished, and the painters are putting on the finishing touches. They are moving back into the remodeled portions of the house and are happy with the whole experience.

“The process has been so painless and smooth,” she said. “It turned out amazing. Hiring an architect to help with the design was so valuable. I mean I have great ideas, but she had awesome ideas.”