From the beginning of the project we’ve known that there was something funky going on with the floor but we didn’t know what was causing it. The original house was built in 1949 and the family room addition was constructed in 1989. During demolition they figured out that the family room floor was built an average of 1 1/2” lower than the kitchen. For the new addition floor framing they decided to match the floor height of the kitchen (& the rest of the house) and then the flooring company has had to come in and add several layers of floor sheathing to raise the floor of the previous family room addition. It’s been my experience that if there’s been a previous addition to your house the chances are much higher that you will run into more issues than if you’re just dealing with the original construction. As a homeowner it is always a good idea to have a 10% contingency in your budget to cover such unexpected costs.

The other exciting development this week was the framing of the roof over back porch. This porch faces north and this past winter Marisa slipped on the old ice covered steps, so she is especially excited to have them covered! 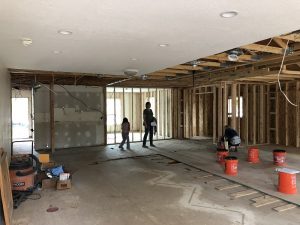 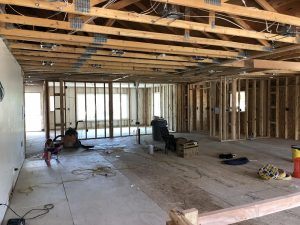 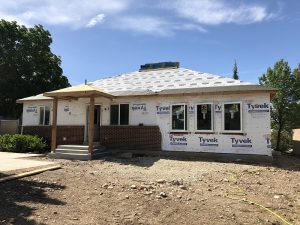