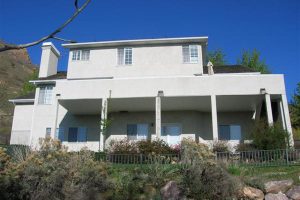 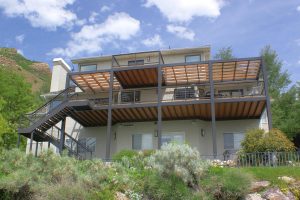 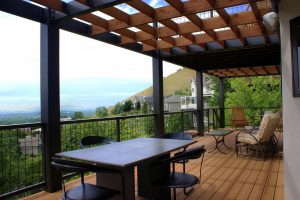 This beautiful deck and pergola remodel was the result of a great collaborative effort between the architect, general contractor, and steel fabricator.

Here are the top benefits of using an architect, according to Russell.

Russell said it is ironic that the people who don’t hire an architect are usually very concerned with cost and budget.

“They don’t understand that hiring an architect can actually save them both time and money,” he said.

We have said it a hundred times before, but the more time a homeowner spends planning a remodeling project, the easier it is to stay on budget. The approach of rolling the dice and seeing how far the money will take you without a clear plan will result in spending more money than necessary.

Involving an architect on a home remodeling project allows for the contractor and the homeowner to be on the same page before the project starts. Since most people only tackle a serious remodeling project once in their lifetime, relying on experienced professionals to guide them through the process makes a lot of sense.

“An architect gives the client a clear understanding of the process and what is going to happen,” Russell said. “It makes everything very clear. They work out comprehensive plans ahead of time so everyone knows what to expect and how much it is all going to cost.”

Ultimately, getting plans from an architect makes the contractor’s job easier and streamlines the process.

“When we get plans with details and pictures of elevations, you know exactly what is going to happen,” he said.

If the contractor doesn’t have a clear plan, it will cost more time and money because the contractor will have to spend time (that you are paying for) trying to figure out what it is that you want and creating all the details to go with it.

When a client works with an architect, his or her vision for the project is laid out in black and white on the contract documents, Russell said.

“This saves me as a contractor from trying to interpret their vision,” he said. “There is no guessing or miscommunication when an architect is involved.”

This also saves the project from expensive change orders. Believe us when we say a change on the plans is much easier (and cheaper) to make than a physical change during construction.

A contractor wants to provide the homeowner with what he or she wants; the goal is to have a happy customer. Therefore, the clearer the vision for the project, the better for all involved.

One of the jobs of the architect is to work with building code officials.

“The architect helps pull permits, works with the different building code officials and knows the building regulations,” he said. “They work with the city, and they know what is doable and what isn’t. This saves an immense amount of time. We are going to have to pull permits anyway, and having that help from an architect saves me a ton of time as a builder.”

A good architect knows the city and county processes and works well with those jurisdictions. Thorough plans that meet the code guidelines are essential to making the permit process seamless.

“Without understanding the city systems, there is a delay in the process,” Russell said. “With the help of a good architect, we get permits pretty quick. They have already been so thorough with the plans, and the city personnel respect their work, so there is not a lot of downtime. It speeds up the process quite a bit.”

It is nice to hear that someone notices our hard work behind the scenes.

When the builder/homeowner team adds a good architect, it makes the whole process better. It adds a different set of eyes that are trying to make things work and solve problems, Russell said.

“Remodels are difficult,” he said. “But when you have a good builder, a good architect and a homeowner working together, it makes the whole process an enjoyable experience.”

Without a good team, the process could take months longer, be more frustrating and cost the owner more.

“Everyone has heard horror stories of remodeling, but when the team is all working together, the process actually becomes fun,” Russell said. “Still stressful, but enjoyable. When the team is working well together, it is a good process from start to finish. Owners have more fun with it. I have even had people say, ‘Wow, that was way less painful than I thought it would be!’”