Most people think about a home remodel for years before they actually do anything about it. What makes someone take the first step to turn the dream into a reality is different for everyone. For Gayla Black and Teresa Frost, it was a flooded basement that finally did the trick.

They came home from a vacation to soggy carpet in the basement. The leak was coming through the foundation wall, and the Sheetrock in the area was soaked.

“We did demolition on the basement right away because we were worried about mold,” said Black. “The leak was likely going on for a while, but honestly that is what really triggered the whole remodel.”

It was about six months after the basement fiasco when they decided to visit with an architect to discuss a home remodel. A whole house remodel was definitely in the plans. They had lived in their 1930s cottage in the Avenues for about 15 years, and while it had seen a few cosmetic upgrades and a bathroom remodel downstairs, the whole house was in need of an upgrade.

The kitchen was definitely on the radar for other reasons besides being outdated. Before the remodel, the tiny galley kitchen was rarely used.

“Our kitchen was so terrible we weren’t even cooking anymore,” Black said. “Now, I cook again.”

“We really stopped cooking in the kitchen about a year before the remodel,” she said. “It was tiny and there was no storage. It only had about four feet of counter space chopped up. And the floor was so old that you would clean it and it would still look dirty. It was distressing. Now even before we clean it still looks fine.” 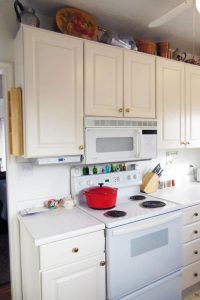 Before, this kitchen was a tiny, galley kitchen with barely enough space for one cook. 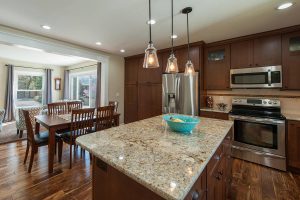 After the home remodel, the kitchen is a now a bright, usable space.

As part of the kitchen remodel, they added a 4-foot bump-out to expand the kitchen and to accommodate its new layout.

“Now after the remodel, besides cooking a lot more,” Frost added, “I am more relaxed and I feel much more organized.”

For the rest of the house, they generally worked with the existing floor plan.

“We had an option to do a large addition off the back of the house, but realized it would be out of our budget,” Black said. “It was a little disappointing to realize the reality of the cost of remodeling, but Renovation Design was able to divide the project into a Phase 1 (basically remodeling the existing house) and a Phase 2 (the rear addition) so that we were able to adapt the scope of our project to our budget before we began construction.”

They’ve finished Phase 1 and are pleased with the results. They haven’t decided on a timeframe for Phase 2.

While they were able to make their whole house more beautiful and livable, they also replaced all the wiring, upgraded the old plumbing, and added insulation.

“It was in need of a remodel just to upgrade all the necessities,” said Black.

Black and Frost say they were also surprised by how long it took to plan the remodel.

“It took over a year for the designing and the planning stage before they started construction,” said Black. “Some of that was us. We had a lot of searching and deciding what we wanted. Renovation told us to look through magazines and online to figure out what we liked and what we didn’t like. Really, we probably should have been doing that for a year before we even came to talk to an architect.”

Black says they also had to take some time waiting for the permits and financing, but once the construction began it was smooth sailing for the most part. The planning and design phase took about 15 months and construction took four months.

“The whole thing is not a quick process,” Black said. “I thought it would be more like, ‘Here is my money. Can you start tomorrow?’” she said with a laugh.

They sped up construction time by moving out of the house. They were able to move in with relatives, and the construction team finished the whole job in one shot. Giving the contractor free range of the site speeds up the process and saves money since he only has to mobilize the job site once.

They are thrilled with the remodel.

“I love the kitchen. Oh, and the basement,” Black said. “The basement that started this whole thing is now bright, well-organized, and comfortable. And it doesn’t leak!”